For Christmas this year, I decided that I wanted to get my mother and father DNA-tested through Ancestry.com.  While it’s true that my family tree is extremely well-elucidated and researched, there are still pockets where certain things are unclear.  For example, I only know back to my 3x great-grandparents on my Krueger side (due to records from Pomerania being difficult to find and the common nature of the family name), so if we matched someone in the world who had Krueger ancestors it would indicate a link between those families despite the absence of documentation.  Similar situations are present for many of the Irish lines of my family due to the scarcity of records from Ireland.

So at Christmas this year my mother spit into a test-tube and sent off an envelope to be analyzed.   Yesterday we got the results back.

My mother’s DNA matched at least 20 people “closely” (5th cousins or better).  I’ll have to investigate each one!

It showed that she has 19% DNA from Scandanavia (that would be the Norwegian side, Hanson and Olson), 32% “Europe East”, which would be the Prussian stuff (Krueger, Hoge, Schmidt, Zierke, Schulz, Winkelmann).  Then 38% from “Great Britain”.  I assume this is the Irish from the Mullins, Hammond, and all the British stuff from the Curtis side of my family.  Then there’s 9% of the DNA marked “Other”.

I have no idea how much confidence to give these results.  I know from my research that my mother’s grandparents break down as follows:

On the Schmidt side of my mother’s family there was a family rumor that someone in the family brought back and married a “Mongolian Princess”.  Interestingly, my mother’s DNA shows 2% of her genetics are from “Asia Central” which is the area around Turkmenistan and Northern Iran.  Very interesting!

Here’s the full breakdown of her results:

As time goes on and other people are tested, we can see if more matches are found.

Using the records I have found, I’ve compiled a timeline of all the towns where the Hadow family lived in Prussia.

All these towns can be found highlighted on the map below except for “Moslitz”.  This is the town mentioned in the obituary of Johann Hadow as his town of birth, but I’ve not been able to find a town by this name anywhere in Prussia.  I’m guessing his family misremembered or misspelled the town when they wrote his obituary. 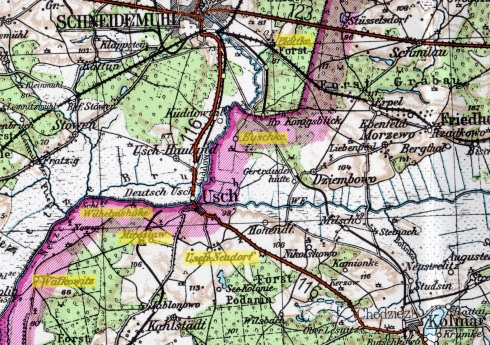 Towns where the Hadow family lived.

Often the process of going back over records you’ve seen many times can be very fruitful.

Tonight I was looking at the German passenger list for the Zierke family, who came to America from Prussia in 1865 aboard the “Neckar”.  Curiously, a transcription for the town where the family had come from had been added, and it said “Jablonowo”.

One thing I’ve come to learn about the German passenger list transcriptions on Ancestry… they are usually pretty good.  The people who do them seem to be experts in German handwriting of the 19th century, and they are often able to pull out information that would not be apparent to English-speakers.

So I looked up Jablonowo, and almost immediately I saw one entry from Kreis Kolmar.  This was quite interesting to me since the Hadow and Willegal families were from Kreis Kolmar, as was the Schulz family, as was the Zierke family who immigrated to Princeton, Wisconsin.  All four of these families are linked to my Zierke family in some way.  Some circumstantially, others definitively. 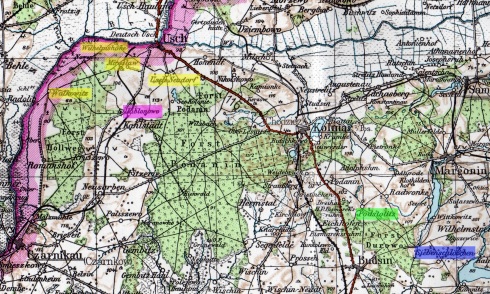 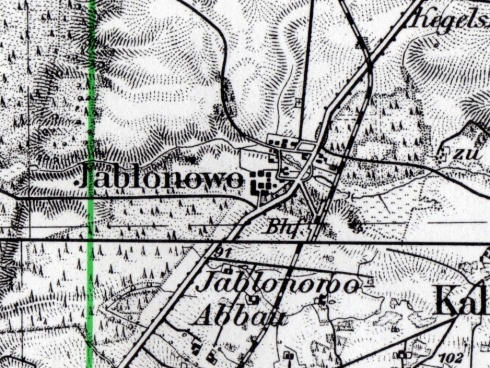 Detail of the town of Jablonowo

My cousin Doris from Germany was asking me about my Zierke family members, so I was putting together a synopsis of the most important information about the four Zierkes who came to America from Prussia.  I have written about this previously, so I refer you to my previous post on Zierke Family Origins for more details, but basically four members of the Zierke family came to America [via Québec] in 1865:

Friedrich Zierke was born in Prussia about 1806 according to the passenger list for his voyage to the US.  We have no other record of him except that he died before 1900 because his wife was a widow in that census.

Dorothea “Dora” Hardow was born in Prussia on 7 July 1814, according to her death record.  The 1900 census says “Aug 1814”.  We have no record of her whereabouts between her arrival in 1865 and the 1900 census where she appears living alone in Harris, Wisconsin next to her son Friedrich Zierke.  She died on 2 Mar 1901 and was buried in Harris in a private cemetery.

Friedrich “Fred” Zierke Jr. was born in Prussia on 16 Dec 1835.  He purchased the 40-acre Zierke homestead in Harris, Wisconsin within 10 months of his arrival, and married Wilhelmine Schulz in November of either 1866 or 1867.  They had nine children, four of which died in infancy.  Fred lived on the farm in Harris until his death from intestinal problems on 12 Sept 1912.

Anna Rosina “Rosa” Zierke was born in Prussia on 7 Aug 1846.  After arriving in the US she married Heinrich A. L. Thalacker, a Civil War veteran from Hanover, Germany, on 17 Jul 1867.  They had 13 children.  Four of them (Mary, Ida, John, August) died of Diptheria in 1882.  Their little tombstones are still visible in the Hallman Cemetery near Harris, Wisconsin.  “Rosa” died 10 Jan 1927.

Specifically, I was writing to Doris to mention that three of Friedrich Sr’s and Dora’s kids died in Prussia before the family came over here.  I wanted to double-check that, so I checked the 1900 census, which does indeed say that Dora had 5 children, of which 2 (Friedrich and Anna Rosina) were living in 1900 [click to enlarge].  You can also see that she’s living near her son Friedrich, who is just two entries down from hers:

That’s when I noticed something I hadn’t noticed before.  Two entries up from Dora is an entry for Michael Hardow and his wife Rosalie Hardow.  Micheal was born in August of 1821 in Prussia, and his wife was born in May of 1823.  That makes a difference of about seven years between Dora and Michael.  Prime candidates to be her brother and sister-in-law, if you ask me!

After a trip to Harris to get many records, it turns out this family is actually Hadow, and not Hardow.  This is, in a way, good news.  Hardow is, from what I understand, a Dutch name.  It was hard to find any records for Hardow.  Hadow, on the other hand, is a name that is more easily found in Prussian records.  I’ve still not found a “smoking gun” linking the two families, but there are some promising signs that the family of Michael Hadow could be the same as Dorothea “Hardow” from my Zierke family.