She was born in the town of Hoffelde, Kreis Regenwalde, Pommern, Prussia on 8 Jan 1858, the eldest child of Carl Friedrich Ferdinand Kamrath [1831-1900] and his first wife Henriette Sophie Pribbernow.  Auguste arrived in America separately from the rest of her family sometime in 1883 when she was 25 years old.  The rest of her family came two years later in May 1885 aboard the “Hammonia”.

Months after arriving in her new homeland, Auguste met and married Simon Wimmer [1851 – 1936], a native of the town of Schwindegg, Bayern [Bavaria], Germany.

Simon was said by his family to have been the son of a Frenchman named LaFayette [he always listed his parents as “French” in his census entries].  His parents immigrated from France to Germany, but died when Simon was just a boy. Simon was put into an orphanage, and was adopted at the age of 12 by Simon Wimmer Sr. and Rosina “Rosa” Wimmer, who were from Schwindegg.

Simon had arrived in America in March of 1880 aboard the “Weiland”.  He then worked as a farm laborer in the town of Honey Creek, Wisconsin before moving near the town of Wausau in Marathon County.

Around the time their third child was born many Prussians living around Wausau, Wisconsin started heading out to the land near Tacoma, Washington.  The timber industry in Wausau was tapering off, but there were still large, virgin forests in Washington state which provided lots of opportunity for jobs.

Simon seems to have moved out to Tacoma, Washington ahead of Auguste because in 1889 he is listed in the city directory as a cook, whereas Auguste said that she came to Tacoma about 1892. Once Auguste had joined him they had two more children: Elsie (b 23 Mar 1894) and Antone “Anton” (b 7 Jan 1896). Simon purchased some land near the town of Roy in Pierce County, Washington, and he and Auguste started a family farm together.

Multiple sources have pointed to their marriage not being a happy one.  One relative wrote me: “Edna Porsch knew the Otremba/Wymer family better than most, and her opinion of Simon was that he left Augusta for eleven months of the year, off logging somewhere, and came back once a year just long enough to get her pregnant and then [headed] off again.”   Eventually the strain of this situation took its toll.  Simon had hired a man to help out on the farm named Otto Antone “Anton” Otremba, a handsome, blue-eyed Prussian.

Anton was born in Westpreussen, Prussia on 1 Nov 1860, one of thirteen children.  He had arrived in America in 1885 and married Antonia Kluk, with whom he had four children. Antonia died sometime about 1897, and by the 1900 census only his daughter Agnes appears with her father. The other children seem to have died in childhood. 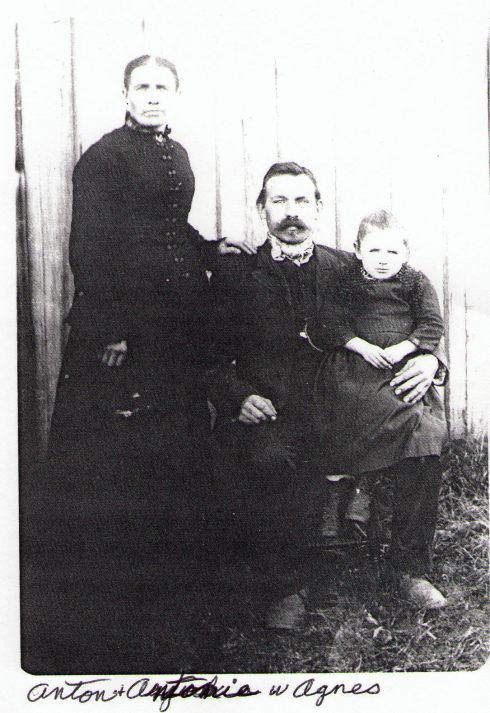 Simon Wimmer and his hired man Antone were, it would seem, close friends at first.  Simon named his only son after Antone. But soon enough, with Simon away most of the time, a relationship appears to have developed between Auguste and Antone Otremba. It’s not known exactly what happened in what order, but Simon seems to have left Auguste and moved out to Sacramento, California sometime about May 1896. The timing of Simon leaving and the birth of his son Antone Wimmer in January of 1896 led to some speculation that Antone could have been the son of Antone Otremba. All evidence, however, points to Antone Wimmer being Simon’s son.

After a year of being left on her own, Auguste filed a motion for divorce. Getting a divorce in 1897 was a rather different thing than it is today, but the acrimony seems to have been just as intense.  Unfortunately we only have Auguste’s side of the story since Simon seems to have not appeared to challenge the divorce.  However, her account was rather grim.  Her complaint, filed in State of Washington Superior Court on the 21st June 1897, states in part:

“The said defendant [Simon Wimmer], disregarding the solemnity of his marriage vow, on or about the month of May in the year, 1896 willfully and without cause deserted and abandoned the plaintiff, and ever since has and still continues to willfully and without cause, desert and abandon said plaintiff [Auguste], and to live separate and apart from her, without any sufficient cause or any reason, and against her will and without her consent.  That since said marriage [Mr. Wimmer] has treated [Mrs. Wimmer] in a cruel and inhuman manner, and in particular, as follows: on about the __ day of January, 1897 [Mr. Wimmer] without just cause, falsely accused plaintiff and whipped and beat her and threatened to kill her.  And [Mrs. Wimmer] verily believes that he would have carried his threats into execution, if he had not been prevented by the timely arrival of a neighbor, he having there and then a weapon, to-wit, a pistol, which he attempted to use…”.

In short, Auguste filed a complaint for divorce stating that Simon had abused her and abandoned her and their children with no means of support.  She asked for a divorce, custody of the children, and an award of the family farm and all property on it so that she could earn a living.

A few facts of timing should probably be mentioned at this point:  Auguste states under oath that Simon abandoned her in May of 1896.  We also know that Auguste gave birth to twins, the children of Anton Otremba, on 28 Apr 1897.  That means those twins were conceived in July of 1896, just two months after Simon left.  In January, 1897, when Simon was said by Auguste to have assaulted her and threatened to kill her, she would have been six months pregnant with Anton’s twins.  In her divorce complaint [filed 21 Jun 1897], when Auguste says Simon is living apart from her “without any sufficient cause or any reason”, she had just given birth to those twins two months earlier.  In other words, it’s hard to know if Simon was a negligent, abusive husband who drove Auguste into the arms of another man, or if he was a jilted, angry husband who left when he found out his wife had taken a lover.  Perhaps both are true, as is often the case.  We will probably never know.

In any case, it appears Auguste got everything she asked for in the complaint because Simon did not appear in court to contest the divorce.  He remained in California, working as a cook, a laundry-man, a laborer, and a farmhand.  He never remarried and didn’t have any other children.  In 1931, a few years before his death, Simon and his son Anton got back in contact and Anton sent Simon some money.  A letter survives, sent from Hayward, California, which is written in a kind of cross between German and English.  It translates to:

“Dear Anton, I received your letter and money. [I] was glad to hear from you and I thank you very much. It is hard for me to write a letter. I can’t see good, my eyes are weak. I see you are all well and so [am] I. I will close and hope this letter finds you all well. Truly, Simon Wimmer”

Simon Wimmer died from a stroke on 22 Sept 1936 and was buried in Mount Eden Cemetery in Hayward, California with no gravestone to mark the site.

Shortly after the divorce was granted, Auguste married Anton Otremba in 1897.  In the 1900 census Auguste and Antone are living on the farm in Roy, Washington, with five children from Auguste’s previous marriage, one child from Anton’s previous marriage, and three children from their own marriage.  In all they had four children:  Elizabeth Louise “Lizzy” (died 1986) and Frederick O “Fritz” (died 1972), the twins who were born in April 1897, plus Francis “Franz” (1900 – 1940), and Ella (1905 – 1980).

Various relatives had memories that they shared of Auguste, but most of them were not flattering.  She seems to have been regarded as somewhat of a tyrant who “ran the family” and was not warm or generous.  As one family member wrote:

“Augusta treated Anton like a slave. Ordered him around and made all decisions for him and he was too weak to argue with her. Uncle Clarence went as far as to say she led him around like a dog.”

This seems to have been echoed by one of Augusta’s great-grandchildren, who wrote:

“My grandfather worked hard and brought money home and had to give it all to his mother Auguste.  Once he asked if he could keep 50 cents of the money he had earned and Auguste slapped him and told him he couldn’t have the money.  Another time Auguste wanted to have a piano, so my grandfather had to work for the money to get the piano for Auguste.  As he got older and got married he wanted the piano for his daughter, Agnes.  He went back to Auguste and asked her for the piano because he had paid for it .  She would not give it to him; he had to buy it from her.”

There were other reasons Auguste was not well-liked by some members of the family:

“The older folks in my family [Porsch] didn’t like [Auguste].  They thought she had smothered the baby twin  girl Clara [Anton’s niece Clara Porsch, born 19 Oct 1904] when she was about 2-3 months old.  Accidentally of course but …. there was some kind of Family gathering at the Porsch home.  Probably Christmas or New Years from the age of the baby who was born in October…and all the coats were piled on the bed.  The babies were sleeping in the bed.  Aunt Edna said that Augusta was very fat and slow-moving and that she sat on the bed part of the evening.  When the guests had gone, Grandma found one of the babies was not breathing.  Grandma thought that Augusta might have sat on the baby thinking it was just a pile of coats.  Grandma wouldn’t tell anyone that until many years later…she said she didn’t want Augusta to feel bad about it and it wouldn’t bring the baby back.  But the children always thought she had killed their baby sister and resented her for it.”

Anna “Annie” Wimmer married Anton William Christian.  They had two children, Ruby and Elmer.  She died in Alabama on 29 Nov 1952, just seven months after her husband did.

Mary Wimmer married George W Scott.  They had a son Emery George Scott.  Mary died in childbirth at the age of 27 on 15 Jan 1916 in Tacoma.

Elsie Wimmer married Ralph Raymond Rissler.  They had a daughter named Nellie Velma “Ella” Rissler.  She then married a man whose last name was Tracy.  Elsie died on 22 Jul 1977 in Tacoma.

Fred Otremba married first Marie Serina Bartlett.  They had three children, Kenny, Reuben, and Elmer.  Then he married Viola Tiny Hoyt with whom he had no children.  Fred died on 30 May 1971 in Spanaway, Washington. 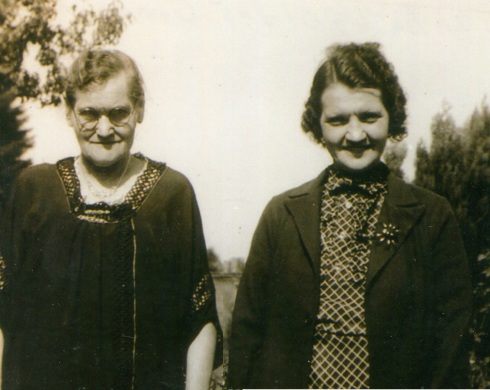 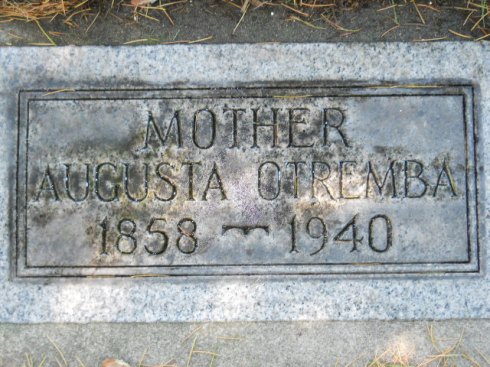 Seeking to bring my ancestors out of the shadows of history and into the light. I have always been interested in history, and at a few different times I tried to do a family tree, but wasn't able to do it with the technology that was available then. On a business trip I visited the World War I Museum in Kansas City, MO and it was a very impressive establishment. While I was there I remember thinking, "Didn't my great-grandfather father fight in World War I? And wasn't his brother killed alongside him in some famous battle? I wonder if I can find out where he died." That's what started it all. END_OF_DOCUMENT_TOKEN_TO_BE_REPLACED
This entry was posted on Saturday, August 10th, 2013 at 3:29 PM and posted in Kamrath. You can follow any responses to this entry through the RSS 2.0 feed.
« Rev. Hugh MacKenzie – Biography
Schmidt Immigrant Obituaries »